Welcome to yet another new series! This one is meant to be a laid back study of the aspects I like and dislike in a game I’m currently playing. I don’t play that much games though (too busy with gamedev!), so expect it to be less frequent.

So, let’s get into it. Soul Sacrifice is a PS Vita hunting game that takes place in a world where the only monsters that exist are those who were once animals or humans. You play as a magician, the people in charge of fighting and sacrificing these beings. It came out in April last year, and while I really loved the demo, I didn’t pick it up until a sale late in the year and I finally started playing it early this year.

When referring to the look of the game, people have critiqued about the “plastic” look the game has. While I totally agree it does have that problem, the art direction in the game is great, regardless of how the final product looks. Monsters have fascinating designs that look great while strongly relating to the backstories of each. Most of the character clothing manage to mix fascinatingly strange, cool and eccentric without going too far in any of those directions (although some of the hoods/hats are a bit ridiculous…), the only weak part is the skimpy female clothing. The worlds are varied and always have magical aspects to the design that makes them interesting. 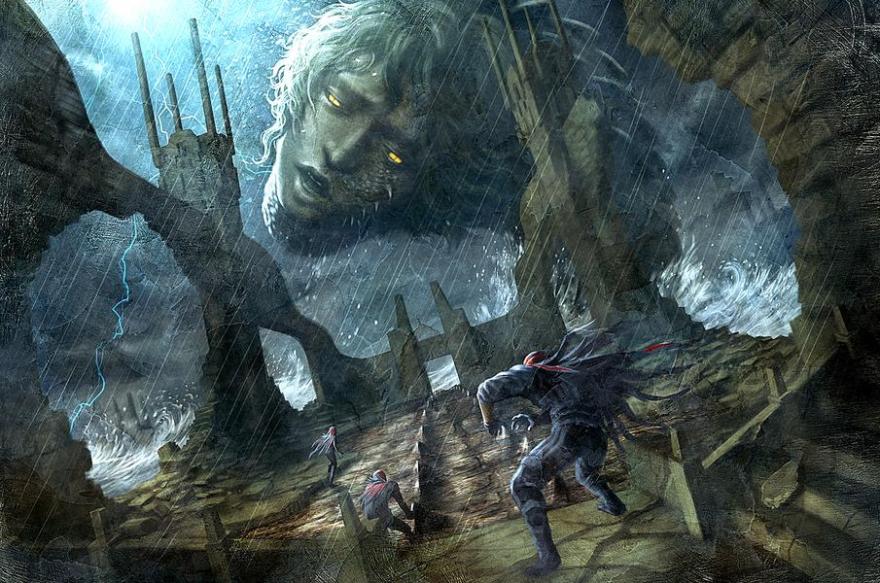 The music in Soul Sacrifice is awesome, and it fits perfectly. The soundtrack is a wonderful contrast between epic, terrifying battle songs and touching, melancholic pieces, both beings aspects that define the game. Everything is skillfully orchestrated that manage to be complex without becoming your typical unmemorable instrumental mess. My only complaint is that it’s hard to appreciate the level of detail inbetween the roars and screams of battle, so to truly enjoy the music it’s best to listen to it alone.

By far, this is my favorite aspect of the game. One of the things that differentiate Soul Sacrifice from most other hunting games is the care and detail put into the world. Pretty much everything in the game has a strong backstory you can appreciate simply by looking at them (as I mentioned when I was talking about the art direction), and they all relate to similar themes. You see, SS takes place in a very twisted, hellish world, but in the end, the stories are about the people that inhabit it. What the game truly revolves around human beings and their feelings, and I find that fascinating. Greed, envy, desperation are just but some emotions the game touches upon. There’s also this whole aspect of sacrificing/saving, and I while I think it’s great, the gameplay consists of you doing it a lot, so it loses a bit of the impact it could have had.

To be honest, I haven’t entirely finished the campaign of the game, but I’m halfway through the last chapter and man… there’s no variety. Well, there is, but it’s really little. I know hunting games are known for their repetitive nature, but the problem is, variety is in there, but it is distributed amongst the entire game. While I understand that the main side-missions should have exclusive battles since they have independent stories, there’s a lot of new monsters (although some are reskins) tucked away in the generic extra missions. I would have missed them if not for having to grind in some parts of the game… 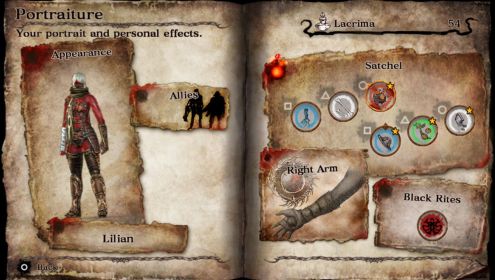 The sad truth is that Soul Sacrifice is pretty repetitive if played for long stretches (not exactly something I do but nevertheless) and this is due to many factors. One of them is the lack of variety mentioned before. Another is the unmotivating reward system. While SS has a performance related rewards, Monster Hunter is just random. At first look MH sounds worse, but it is at least more addicting than SS which basically requires you to play perfectly (basically avoid getting hit at all, which is annoyingly difficult) to get the top items. And the problem is, if the grinding is unmotivating, it feels even more repetitive than it is.
But, if I were choose the main problem, I’d have to say it resides in a main gameplay mechanic: offerings. MH has a weapons system, where each weapon is deep and requires different play strategies. SS, on the other hand, has offerings, which are basically a lot of different simple skills/weapons, like swords, projectiles, explosives, etc. The key word here is simple. The problem is that there’s almost no depth to using any of the skills. Sword? Just get near the monsters and slash it. Projectiles? Aim at the monster and shoot. I mean, it’s still pretty damn fun (especially since they make it feel so good) but the lack of depth becomes a problem when you want someone to do the same thing over and over again.

It’s worth noting that an expansion for the game has come out,”Soul Sacrifice Delta”, which apparently improves a lot of things but I have no idea since I haven’t played it.

Well, that’s all for this first edition of The Moose is Playing! So, what did you think? Have you played Soul Sacrifice? And if so, what’s your opinion on the game?