Hiya! This is a postmortem on my first weekly game in the “Us.” anthology, group. You can play it here. I’d love to say I’d do the usual and say what I did right and what I did wrong, but this postmortem is just going to be about what I did wrong… But hey, they say you learn more from your mistakes, right? 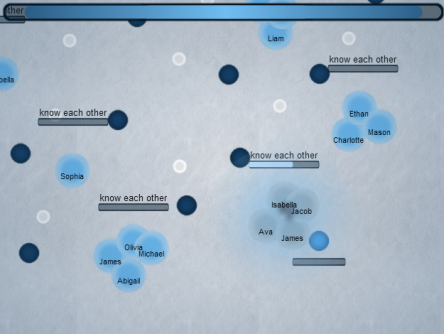 Slow iterations and lack of time to polish

The timeline for group was “start on Tuesday, finish on Saturday”, but I didn’t manage to define and finish the basic gameplay until Friday morning. Why did this happen? I blame my slow iterations. group went through approximately 2 noticeable iterations before I was done with it, and even so I would’ve liked to iterate more. I’m not a fast programmer, so part of the blame can be directed there, but I think my true error is a lack of paper or mental prototyping. Coding a prototype may be the most “correct” way of testing an idea, but you can get a good enough approximation by just imagining the game in your head or with pieces of paper. Most of the problems that made me start new iterations were quite obvious, so I think I would’ve noticed them if I had only spent more time thinking.

If I had done paper/mental prototyping, I would’ve saved a lot of time, and that time would’ve gone into polishing. “Wait…” you might think, “this is a prototype! The idea is to experiment, not polish!”. And I agree to a certain degree, but I feel that my problem is that I want to convey a message/meaning. A lot of this is done in subtle ways, such as details like the names the little circles have (would you have interpreted them as people without the names?) or simply the way the game stats are balanced. This for example is crucial for one of the messages I wanted to transmit, but due to the poor and rushed balance I doubt anyone will notice it. Then again… that is a problem I also blame on my next mistake.

Dreams and Reality, one of my previous games, also aims for a similar goal of transmitting a meaning/message through mechanics, and while I think it kinda failed at it for a variety of reasons, it does something important I didn’t notice until I made group: the gameplay is slow and simple. I’m not necessarily saying it’s a good things (many people critiqued D&R for being slow), but being slow, it makes it easier for people to think about and interpret the game while playing. 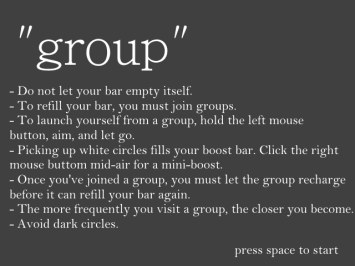 group went to the other extreme and is a pretty complicated game for a simple 5 minute web game. You can tell that even I had problems explaining it in the rushed instructions I wrote up there. All of this detracts from the experience; you’re stressed out trying to survive the constantly decreasing bar despite your confusion instead of understanding and interpreting the system. Of course, I think games that seek to transmit meaning can be complex, but a complex system is better suited for a longer game where you can introduce things gradually. And the worst thing is… the initial vision for group was pretty simple! How did it get complicated?

Loss of vision and the search for “fun”

group, and all the games in anthology really, share the same goal: begin with a message, and create a game that transmits this message. Thus the first ideas I had for game mechanics were tightly related to the message, and I liked that. But… what happened when I actually started making the game? The original message was forgotten. While the initial mechanics were still there, the iterations became about “what can I add to make this more fun?”. Of course I still wanted to make a game with meaning, and so I tried justify myself by thinking of a “message” behind these new mechanics, but they were weak, because they were mechanics brainstormed in to add fun, and even if they had a smart message, they were diluting the original message.

Ultimately… I guess these three issues are related. The search for “fun” lead me to iterate on more and more mechanics instead of polishing the ones that did reflect the message, and so many mechanics made the game too complex to understand and enjoy. group was a rocky start for the anthology, but a useful one, and I hope these lessons help me make the other games better. This week I’ll be working on a new called closeness… let’s hope it’s interesting!