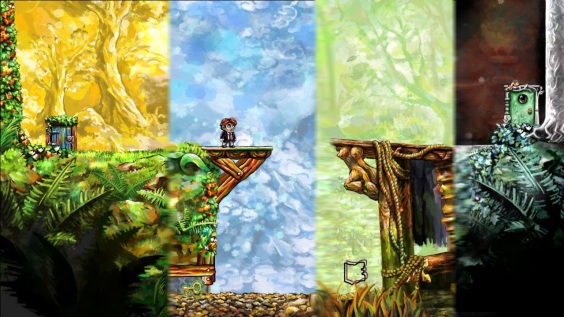 Welcome to the first edition of Alce Analyzes! This’ll be an irregular series where I take one particular aspect of a game/movie/book/etc I like and analyze it.

So, for this first article, I decided to look at some examples of elegance in Braid (which I only just finished for the first time recently). Jesse Schell defines in his book “The Art of Game Design: A book of lenses” (which you should really read if you haven’t) something elegant as “a simple system that peforms robustly in complex situations”. A simpler definition would be “a simple system that serves many purposes”. This is good because it makes a game easy to understand but still be able to have interesting interactions. An example I like using is the jump in Mario games. With a jump you can:

So now that we have a clear idea of what elgance is, we can look at a couple examples of it in Braid. I’ll be spoiling a lot of the puzzles, so if you haven’t played the game, go play it and the come back! I’ll still be here.

There’s a lot to be looked at in the different worlds of Braid, but I’ll look at the second (third) one, where certain objects have the property of not being affected by time.

Let’s go to the pit level where this property is presented. You jump down and kill the monster to get the key. But then… you’re stuck. With nothing else to do, you rewind, and get out of the pit and hey! You still have the key, because the green aura means it isn’t affected by time rewinding. Here, the ability to not be affected by time rewinding lets you keep the key while being able to get up again; it lets you maintain a state (have key) while changing another (being at the bottom of the pit). And this is only one of the uses of this property.

In this level, your objective is to get the puzzle piece on top of the cannon, but the clouds are always moving to the left so you can’t reach the cannon by jumping. What to do, then? The trick is the clouds in the bottom row: they’re arent affected by rewinding. By rewinding then, the top clouds move back (right) while the bottom row keeps on going. The result is this:

We have found yet another use for the propery of being unaffected: it lets you change the timing of objects in the world. There’s one last use I want to look at.

Yep, the cannonball is going right into that monster’s face and problem is that we need him to get the puzzle piece. Luckily for us, he isn’t affected by rewinding. So what do we do? By rewinding time, the cannonballs go back while the monsters keeps on trudging forwarad. So, we have yet another reason why this property can help us: it lets us move things we normally we wouldn’t be able to move, while not affecting the object we want to let pass.

This isn’t strictly elegance, but it’s one simple idea (a pit) that’s reused to serve many purposes. Before I get into to why the elgance here is so good I’ll explain the levels:

In the first pit, you jump down and kill the monster to get the key and rewind to get out while still keeping the key. Simple.
In the second pit, your first instinct might be to jump into the pit, but you quickly realize that the enemy (and time) won’t advance unless you move forward. You can’t advance enough in the pit so you’ll have to rewind to get back up, and then go forward until you hit the door, by when the monster will have already picked up the key. You’ll have to go back to jump into the pit to get the key, and with that you’ll realize that time goes backwards when you move backwards.
The third pit appears simple at first. You just have to pick up the puzzle piece right? But it doesn’t have a green aura, so when you rewind to get out of the pit, you’ll lose it. But that’s when the magic happens: as you get out of the pit and let go of the rewind button,  a shadow emerges out of you and repeats all the actions you did before you rewinded, thus picking up the puzzle piece for you. There’s also one last pit level but honestly there’s not much to it.

As you can see, these levels do an excellent job of teaching the player the respective mechanics to the player, and elegance helps a lot with that. We start with the first pit, which has a clear objective: jump down and get the key. So, when the player makes it to the next pit level he’ll have that objective in mind, and so his first instinct will be to jump into the pit; but we already know that won’t work. The same thing happens in the third pit level. So, why is this good? Because by sharing the same basic idea, the differences are more apparent. By reusing an known idea, there’s is no superfluous information the player has to learn, and thus he/she can concentrate on the new aspects properly.

So, that’s only a look of some of the brilliance of Braid, but I hoped you liked it. If you have any questions or comments, don’t be afraid to leave a comment!

One thought on “Alce Analyzes: Elegance in Braid”